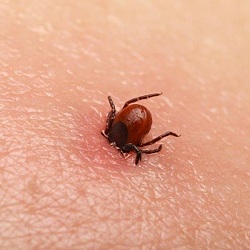 Ticks have their head, thorax and abdomen fused into one region and in this way may be distinguished from spiders. They have 4 pairs of legs in the adult stage where as the immature have 3 pairs. Ticks may cause death to warm blooded animals by introducing toxins into the bloodstream or cause both minor and  major infections generally depending on the individuals resistance to the toxins. There are 4 distinctive development stages in ticks. -- egg, larva, nymph and adult. The continuity of growth depends on the tick obtaining a blood meal to enable it to pass from one stage to the next. The adult female must have a blood meal for the protein that enables it to produce eggs.  The Egg--- Eggs are laid in moist situations such as under bark and debris which may be in contact with the soil. A female can lay up to 3,000 eggs which hatch in 40-60 days depending on the temperature and humidity. These conditions are ideal around the Northern Beaches and North Shore areas of Sydney. The Larva-- They are about 1-2mm long and have 6 legs. After a short while when their skins harden they climb onto the foilage of plants, from where they can attach themselves to aminals brushing past. They insert their mouthparts into the tissue of a selected host and commence to withdraw blood It seems that the larval stage requires a native host ( bandicoot, kangaroo, possum or rabbit for its blood meal. After a period the host is not so specific. After feeding for a period of 4-6 days , the larva will fall to the ground where it moults before reascending the vegetation as a nymph.  The Nymph--may remain in the moist vegetation for up to 14-40 days before attaching to another warm blooded animal. It will measure between 2-5 mm and now has 8 legs. When a favourable position is located on the host it will feed for 4-7 days and drop to the ground and moults again before climbing back onto the vegetation as an adult.  The Adult-- female tick now 5-6 mm long after a period in the moist vegetation will attach itself to a host and commences to feed. The period of engorgment is variable, usually 6-20 days. A fully engorged female tick is globular and almost 10mm long.

The tick becomes attached to its host by inserting its mouthpart to ensure it is held in place whilst feeding. At the same time, a material is injected from the salivary glands of the tick, and this prevents the coagulation of blood. It is this anticoagulant and perhaps other materials that is tixic to animals. Fatal paralysis in mice has been produced experimentally by injecting them with fluid from the salivatory glands of ticks. Once a tick has been detected it should be treated immediately.

Ticks have become a very nasty problem on the Northern Beaches and North Shore areas of Sydney. R.I.P Pest Management offer services that include tick spraying to lawns and gardens giving ongoing relief to your family and pets.  The last thing you want is to have your pet affected by a tick bite in vision the of your children as this is very distressing for all concerned.

A life threatening meat allergy has emerged on the Northern Beaches and North Shore areas which is transmitted by tick bites.The red meat allergy involves beef, pork and lamb, not chicken or fish. The induced mammalian meat allergy is unusual in that the onset of the allergic reaction, which ranges from mild gastric to life threatening anaphylaxis, can occur up to 3-6 hours after eating meat and often many months after the tick bite. Other better known tick allergies show immediate anaphylaxis , large local rashes and swelling around the bite, paralysis in young children and pets and various infections, including so called Tick Typhus, a flu type condition transmitted in much the same way as a mosquito transmits malaria. There are several cases each day reported from Mona Vale Hospital Emergency Section related to ticks. The public know about allergies to peanuts and bees but by far the most common allergic reactions are caused by ticks.

In my opion the main reason for this increase is due to continued development across the Northern Beaches and North Shore areas. The more development that happens the more land is taken away from the tick carriers such as bandicoots and possums. These animals are forced into residential blocks to feed and therefore bring the ticks with them. The ticks get blood from their carriers and hop off when finnished. The ticks will go through another stage of life until more blood is required, whether it be you, your children, your pets or another bandicoot they will attach. The next time a tick gets on you or your children it last meal may have been from a possum, rat, bandicoot or dog.  Dont risk it!! Call R.I P for protection.

I have seen the increase of ticks generally across Sydney particularily over the last 5 years. Suburbs like St Ives,Pymble, North Turramurra and surrounding areas now have a high degree of tick activity. This will no doubt increase over time with continued housing development and social awareness of protected species.

R.I.P will protect your family and pets from the increasing dangers of ticks with revolutionary tick spraying programe. We have a number of clients who rely on R.I.P to keep the ticks away as they are allergic to ticks. Our service will both kill and repell ticks for several months.

As we watch the COVID-19 situation unfold around the world and in our current Greater Sydney, we want reassure you that our team is taking all precautions to keep you and our staff healthy and safe during this unfortunate time. R.I.P PEST MANAGEMENT will continue business operation as usual. If there is anything we can do to help our clients, we’re just one phone call away.