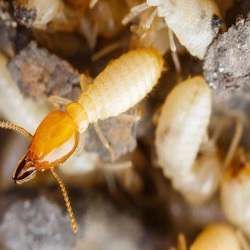 Eating You Out of House and Home

Termites or Isoptera, which is their scientific name are well known for destroying human property and constructing huge mounds. They are often called "white ants" because most of them are small and white and live in colonies in soil underground like ants. Termites are serious pests and can cause significant damage to the home or property.

The workers care for the eggs, gather food, feed other termites and build the nest. Soldiers defend the colony from intruders such as ants, birds, people and anything else that may disturb the colony.

The reproductives either fly from the colony to set up new colonies or remain behind, acting as supplementary Kings and Queens.

What is the Difference Between White Ants and Termites?

Contrary to popular belief, termites are not white ants. Ants are actually predatory of termites. However, we have seen them living together.

Carpenter ants are often confused with termites, as they live in similar environments. Termites differ from other wood borers, as they are social insects, living in colonies with various grades of organisation.

As for their appearance, ants are usually dark in colour, and termites are cream, white or even translucent, so this is why they are commonly referred to as "white ants". Their antennae are different from each other too as ants have elbowed and the termites have straight.

Termites live in a diet of cellulose which is a compound found in wood and plants, so their food supply is wooden structure. Ants eat a variety of different things, from sugary liquids, meats, plants to fungus.

Where are Termites Found?

Termites are found all throughout Australia. However, they are more abundant in tropical and subtropical areas. They are abundant throughout Sydney, especially within the Northern Beaches and North Shore areas.

All termites consume cellulose-based plant materials such as timber because when they eat through wood. The protozoa and bacteria in their gut allow them to break down the cellulose fibres in wood. This is the reason that termites are attracted to homes as most foundations are made of wood.

The most common type of termites gets in the home through wood-to-ground contact. They enter homes through cracks in the foundation or in the brick mortar. They create mud tubes that make it convenient for them to travel back and forth from their nest to the colony.

What are the Most Common Types of Termites?

The most commonly found species are:

They are found in the entire Australian mainland and are considered the most destructive termite species in the country. They can destroy buildings or other timber structure and, they are the most widely distributed and destructive timber pest in Australia.

Moisture supply is essential for these species although they can get them from different sources other than soil. They build their nests in trees and prefer silky oaks, Eucalypts and other hardwood species. The colony is usually found in the root crown or lower part of the tree trunk. Subterranean termites may also have sub nests in your walls, in the cavity between levels, subfloors or roof voids.

They travel through underground tunnels or over structures in mud tunnels to find a food source.

Dampwood termites make galleries and nests in rotten or damp wood. They aren’t major pests, but will attack the damp wood of your home. Ensure your Decking timbers, fences, garden timbers and at times subfloor areas generally with high moisture readings are inspected regularly.

While not a major pest, the West Indian Drywood Termite causes massive destruction in Queensland and New South Wales. We’re aware of two cases where they’ve been located in the Northern Beaches, by travelling in timber products brought down from Queensland.

What the Signs of Termite Attack

Your home or office may be infested with termites if you notice:

What Should You do If You Find Termites?

If you find a termite colony in or around your home, DO NOT DISTURB or spray them with a home insecticide. We use specialised products termites take back to their nests so they can eliminate themselves.

If you disturb or spray the termites yourself, you’re only making this control measure more difficult, expensive and time consuming.

We recommend you leave the termite control to us, and let our experts tackle the problem for you. Our mission is to provide the best value termite pest control in Narrabeen, Hornsby & North Shore and other Northern Sydney suburbs.

A high-risk area can be due to numerous factors, and our inspectors can discuss these with you on-site and in a comprehensive report. Our 13-page reports contain a wealth of knowledge and recommendations to reduce your risk of termite invasion.

If termites are found on your property, we can create a personalised quote to remove the pests.

Are you about to buy a new home? Before signing on the dotted line, ensure you call [99995510] or email  the R.I.P. team for a thorough Timber Pest Inspection.

As we watch the COVID-19 situation unfold around the world and in our current Greater Sydney, we want reassure you that our team is taking all precautions to keep you and our staff healthy and safe during this unfortunate time. R.I.P PEST MANAGEMENT will continue business operation as usual. If there is anything we can do to help our clients, we’re just one phone call away.